Yesterday we had a big win with music practice.  I was with my son when he was doing his cello practice, and in his new piece there was a particularly tricky sequence that required him to think about several things at one time in order to play it correctly.

Before he played it, I did a mini think-through with him, asking him what he needed to do with his bow when he got to this part. He said, “push it down toward the bridge”. I said, “That’s exactly right.” You have to push it down as soon as your other hand is shifting up into 7th position. He nodded.

Then he started to play that section. When he got to that part where he had to shift into 7th position, I could see that he was thinking about it because he hesitated slightly, but then sure enough, his arm pushed his bow down toward the bridge and he got this beautiful sound. When he finished, I said, “You remembered what to do with your bow during that tricky 7th position part! You pushed it down and the tone was beautiful.” He smiled and then played it correctly three more times.

Preparing for Success requires us to be proactive, thinking about what’s gone wrong before and then doing something different to get a better result. Think-throughs work. They are the best way to help kids know what they need to do, remember what they need to do and then to do it without reminders. 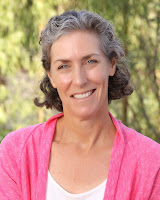 Posted by Amanda Deverich at 8:46 PM