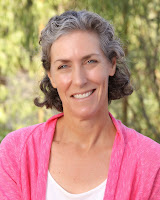 Last week, my 11 year old was studying for a math test and had just finished a practice exam. As I was looking it over, I noticed that he got every problem right. This wasn't usually the case. Often his numbers don't line up very well, so that can throw off his answer. He also tends to do a lot in his head and then doesn't check his work by writing out the equation.

My first instinct was to go tell him what an awesome job he did on the practice test, but then I realized how vague that praise was and took a second to really think about what was so "awesome". So I just described what he had done differently. I said,

"I looked at your practice test, and I noticed that all your numbers lined up and that you even took the time to check your answers by writing out the equation. You might have solved the problems right anyway by just doing them in your head, but you went that extra step to make sure you got the right answer. That was very thorough work!"

He was looking at me, taking in every word, and he gave me a big smile.

It's ever so tempting to just throw out the "Amazing" or "Great job" kind of praise. The problem is that it's too vague to be meaningful to children, and truthfully, it's also exaggerated. The second type of praise we're often tempted to give in this situation is the "You're so smart" type of praise. Our goal is to build our child's confidence, but current research in educational psychology by investigators such as Carol Dweck, strongly suggest that praising performance or intelligence actually backfires and diminishes motivation as well as children's performance. What is effective for increasing motivation and the willingness to take on challenging work is focusing praise on your child's effort. If you haven't read the fascinating article in the NY Times about the inverse power of praise, it's worth your time.

My son ended up with a high score on the test. The Descriptive Praise he received about the practice test gave him very specific information about what he had done to achieve that score. One of the wonderful things about Descriptive Praise is that it is not only effective at improving a child's habits, which in this case was improving my son's attention to detail, but it also made both of us feel so good. It boosted my son's confidence, and it made me feel good as a parent that I was influencing him in a positive way by praising his effort.